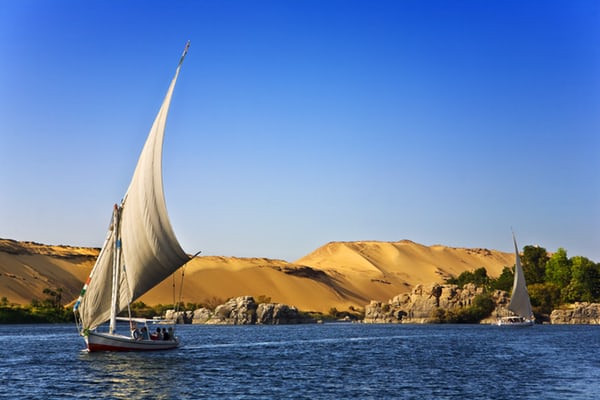 “Egypt is the Gift of the Nile” is an old quote that clarifies the deep relation between Egypt and the Nile River, I am Seshat let me tell you all about the story of the glory Nile, we will explain how to use egyptair offices to discover the life pharaoh.

The story began at old ages, the pharaohs lived along the Nile River banks where they built simple cottages and houses for accommodation, grew some crops, and domesticate a number of animals and this was the first step to the Egyptian civilization.

Cultivation was the first point as the Nile River overflowed, carrying silt deposits which covered the nearby lands along the Valley of the Nile and make them fertile.

The first crop that the ancient Egyptians cultivated was Wheat because the crops was depending on the Nile floods, That’ why wheat was considered as a solution to the starvations threat and reduced amount of food at this time, in addition, they used some animals like camels and water buffalos for food, carrying goods, and plowing.

In short, the Nile River is essential for crops, livestock and of course the people, and gradually, a lot of the ancient Egyptians relocated to the Nile Valley where they could find a better life.

Because the pharaonic Ancestors lived together on the Nile river banks, they built the wonderful ancient Egyptian civilization, which I can tell you it’s one of the greatest civilization in the ancient history which was witness on building many tombs and temples with precious and stunning jewelry and treasures.

How Can You Discover The Nile River?

I can ensure you that a Nile course is the best way to reveal the secrets and glory of the great Nile as you are sailing across the Nile, you will have a great chance to watch the sunset on the Nile and check out the amazing natural views of the nature and enjoy your stops during the journey to visit some of the beautiful ruins, Egypt cruise is one of best activities you can do in Egypt.

Discover the Secrets of The Egyptian Civilization

Now, I want to tell you some secrets about ancient Egypt, so listen closely

Egyptian women were the first women to have had a big number of rights and freedoms:

Let me highlight some details about that; however women most of the time viewed as socially and publicly less than men, Egyptian women enjoyed a lot of financial and legal independence. Back then they had the ability to serve on juries, sell and buy property, make wills and also can enter into legal contracts.

Most of the time the Egyptian women did not work outside the home, the women who did usually work took equal money for doing the same job as men.

Egyptian couples were even known to negotiate an ancient before marriage agreement. These contracts listed all the stuff and wealth the wife had brought into the marriage and that would give a guarantee that she would be compensated for it in the case of a divorce.

There are some evidences that prove a hippopotamus may kill King Tut.

We know little about the life of the young king Tutankhamen, but some Egyptologists believe they discovered how he died. This drastic departure from traditional Egyptian burial practice shows that he may have suffered a severe injury prior to his death. According to a few number of Egyptologists, one of the most likely reasons for this wound would have been a bite from a hippopotamus.

Evidence shows that the ancient Egyptians hunted the beasts for sport, in case of the young pharaoh was really fond of stalking dangerous games, then his death might have been the result of a hunt gone too far.

The best way to travel to Egypt is by Egyptair, there are a lot of Egyptair offices everywhere. also, you can ok your ticket online and you can use egypt railway.

At the end of our journey to few places in Egypt, you can see that Egypt is a place of rich history and you can make sure about that by checking the unique ruins of ancient Egypt as either temples, tombs or others. Whenever you visit Egypt, it will be a forgettable experience.

Tell us about what you love about Egypt??